Deprecated: Function get_magic_quotes_gpc() is deprecated in /home2/bettercities/public_html/wp-includes/load.php on line 643
 Week 5 : Engagement 5, The Sickly See-Saw and The Amazing Ninja Challenge |

Week 5 : Engagement 5, The Sickly See-Saw and The Amazing Ninja Challenge

We had our final Food Ninja weekend in week 5, on the 23rd and 24th of August. On the Saturday, for engagement 5 we wanted to share one final lesson with the children which was the consequences of eating too much salt and sugar.

Eating too much salt can cause hair loss and hypertension (an unhealthy heart) and eating too much sugar can give you bad teeth and diabetes. We tried to teach this lesson to the children as visually as possible, as it was new information and we wanted to leave a lasting impression. 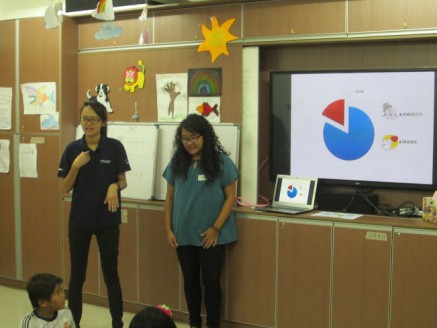 We covered this lesson in the ‘Sickly See-Saw’ activity. First, Samanatha gave a short presentation about why eating too much salt and sugar has bad consequences using images and cartoons pictures the children can relate to. Then, Will and Sam led a mini science experiment with the children. The children were split into 4 different groups and each group were assigned different types of food to measure its sugar or salt content. We selected things that the children were familiar with and purchased frequently from the local food stalls. Two groups would measure the sugar content of Milo and the other of fruit cordial. While another two groups measured the salt content of Super Rings and Tiger Biscuits. 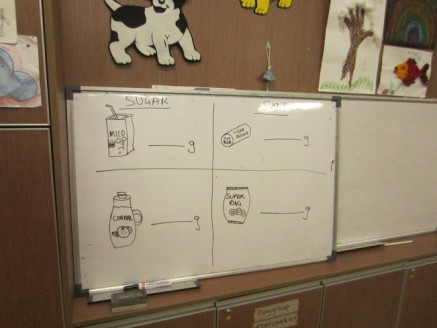 We gave each group a ‘See-Saw’ and a cup containing the same amount of sugar or salt found in their designated food. The children then had to add sugar or salt to balance the see-saw with the cup. In the end, the children had to take the balanced cup to a weighing scale to find out how much it weighed and then shared it on the board. This activity was very hands-on and the children could observe for themselves the amount of sugar and salt goes into a packet of some of their favorite food. The children were then asked to compare which types of food had more or less sugar and salt and we discussed which ones were considered healthier. 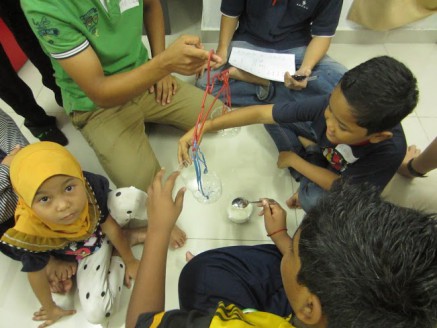 The Sickly See-Saw – measuring and balancing

Next up, we wanted to do a re-cap activity of all the things we had learned during the Food Ninja program. We decided to do an Amazing Food Ninja Challenge with the children, similar to the amazing race with different stations, tasks, and pieces of puzzle to collect. We broke the challenge down into four different station that was managed by the 5 EPs. We placed the stations in different parts of the PPR and gave each group a map to figure out just where the stations are. Each station would lead to the groups to another station based on a simple question. For example after completing a station, the station master would ask, ‘What does eating protein do for your body?’. The children have learned about the different nutrition and know that protein gives us muscles and would then have to look for the muscle station in the map. This was a way for us to keep the game interesting and organised while re-capping the use of maps with the children. 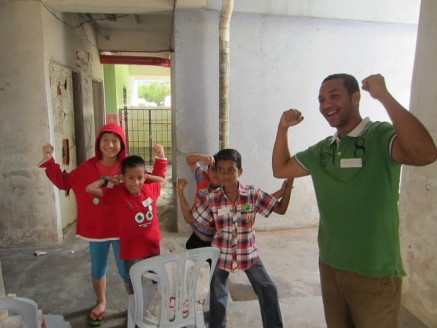 We had ‘Pass the Parcel’ station, where the children had to pass around the parcel until the music stopped. At each layer of the parcel the children had to act out the benefits of eating different types of nutrients. For example, if the parcel read ‘Healthy eyes’, they would have to act it out and then as a group decide which nutrient gives you healthy eyes. We stuck the nutrients options (Vitamin A, B, calcium, carbohydrate and protein onto a nearby tree for hints. 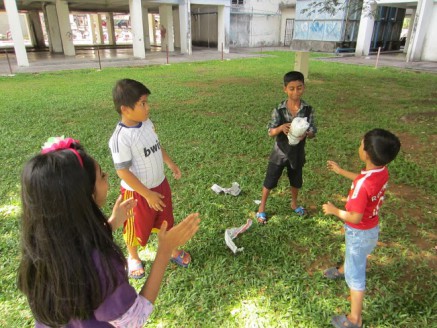 There was also a ‘pop the balloon’ station, where the children had to pop balloons filled with different caricatures of consequences of healthy and unhealthy eating. The children had to pop the balloons using anything but their feet and then take a picture of their caricature. They then had to discuss what causes the different consequences. This activity is based on the earlier ‘Sickly See-Saw’ experiment. 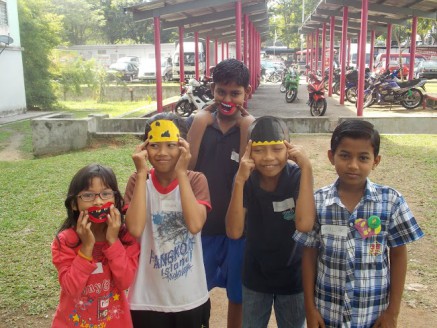 The children and their caricature at the ‘Pop the balloon’ station

Another station was a MyPlate re-cap where the children had to sort out a giant MyPlate and decide which food groups the food falls under. And the final station was a ‘Pin-the-tail’ like activity where the children took turns to be blindfolded and then had to paste their selected habit onto a healthy ninja and unhealthy monster. This was to re-cap the healthy and unhealthy lifestyle habits that we covered in engagement 4. 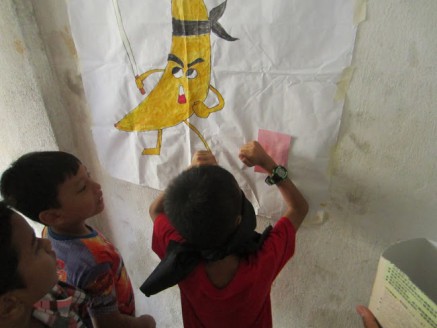 ‘Pin the tail’ onto the healthy ninja or unhealthy monster

At east station we also distributed water to keep them hydrated and re-iterate the importance of drinking enough water. We also gave out bananas as a intermission in between the stations for the children to power up! If they completed the task at each station, the groups were a piece of puzzle, which they had to put together in the end to create a full picture. Needless to say there was a lot of running around that day but the children as usual didn’t show the slightest bit of fatigue! We wanted the children to show their initiative themselves so although each group was accompanied by an adult, they completed each station on their own and had to help each other out to complete the tasks. 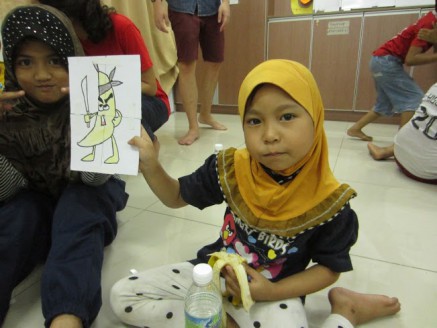