A lot of time is spent waiting everyday, especially on commute. What is worse is the boredom. Time is proven to be relative especially during those days when minutes seem like hours without that good Ipod music. Gosh! Why did I leave that at home?

Thankfully the people at #BetterCities have come up with a myriad of strange, out-of-norm interventions in the most familiar of spaces: bus stops. The project, While We Wait, consists of creative, interactive activities devised to address and interact with commuters’ idle time while they wait for their bus to arrive.

This time #BetterCities is working on a seed distribution bus stop, effectively transforming an everyday ordinary bus stop into a ‘guerilla gardening’ node. For those uninitiated to the world of ‘guerilla gardening’, it is just a bunch of self-initiated people who look to rehabilitate neglected spaces with plants. 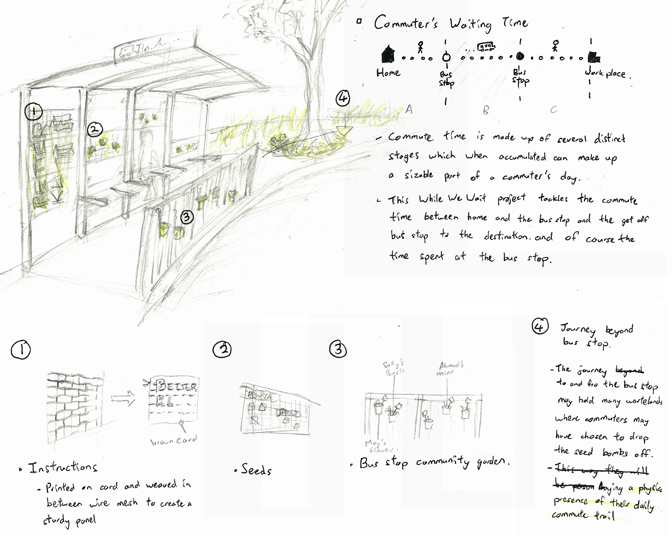 We started out very simply hoping to see a green bus stop (one with a vertical garden wall or a green roof), but it soon turned out that just a greener bus stop will not have you (participants) spend your waiting time effectively.

Thus we had an idea, what will happen if we turned the bus stop into a seed bomb distribution centre, on top of a transportation node? Will people drop the seed bombs onto neglected spaces along their commute? Will the nearby scenery of the bus stop change in a few weeks? Will people come back and check on their plants every time they commute? Or will someone steal all the seeds for their own evil purposes? Haha!

It soon became clear that we had to try it out. It will be a social exercise in the act of allowing the community to stake a physical claim on the bus stop, through plants, at a very public space, the bus stop. On any other normal day, their temporal physical presence is the entire physical claim they have on the space.

This not only means that we are using their waiting time effectively but stretching out the evidence of well used waiting time for all KLites to see.

Alex Lee is an urban explorer, DIY dude & greenie. He is constantly exploring, observing and apply interventions to cities to create conversations. Pint-sized but feisty, he is currently one of #BetterCities’ collaborators, leading our While We Wait project in Greater Kuala Lumpur. Alex believes the city is a living thing.