Our design intern, Lay Sheng responds to Jia-Ling’s recent article, “Unpacking the KIDEX Controversy” on his experiences living carless in Kuala Lumpur having lived in Singapore for six years.

Navigating through Kuala Lumpur’s traffic gridlock is like attending a massive funeral procession that moves forward in a slow crawl. It is a gathering of strangers who keep to themselves. Each one of them feels this lingering depression, simmering anger despite the air-conditioned interiors in our cars, and go through the occasional outburst of emotions in the form of a ‘honk’. The death is inevitable. Kuala Lumpur could not have survived the massive clogging of its artery.

We believe that owning a car empowers us. Sure, getting anywhere you want with such ease is the hallmark of freedom and adulthood. But the ownership of an automobile inevitably means we are constantly chained to it like a slave is to its owner. We are the slaves. We work manually to drive it, clean up the dirt accumulated in its system over the weekend, and we care obsessively about its health and safety. Correct me if I am wrong, but a driver’s mind is always pre-occupied with thoughts like I need to get my car parked under a shade, Is it safe to park here? Will my windscreen be damaged by other cars? This kind of preoccupation with the state of your car disengages us from our surroundings and shuts off your minds to the many delights of travelling that.

Navigating through Kuala Lumpur’s traffic gridlock is like attending a massive funeral procession that moves forward in a slow crawl.

Moreover, where we want to go is not a choice. In our city, it is dictated by big developers who built roads in a certain direction, shopping malls that are strategically placed to be reached easily. We will never be able to go to places only reachable on foot. Owning a car is buying into a way of life designed by the developers. Now, we purchase our goods from big retail parks located in the outskirts of town (think Johor Premium Outlets), buy houses in Shah Alam just to travel all the way to Kuala Lumpur for work and justify a way of life that punishes the minority of KLites who walk and cycle. Our freedom is confined to the choices made possible by the powerful elites within the developer circles. Our freedom is built on the misery of the cyclists and pedestrians. 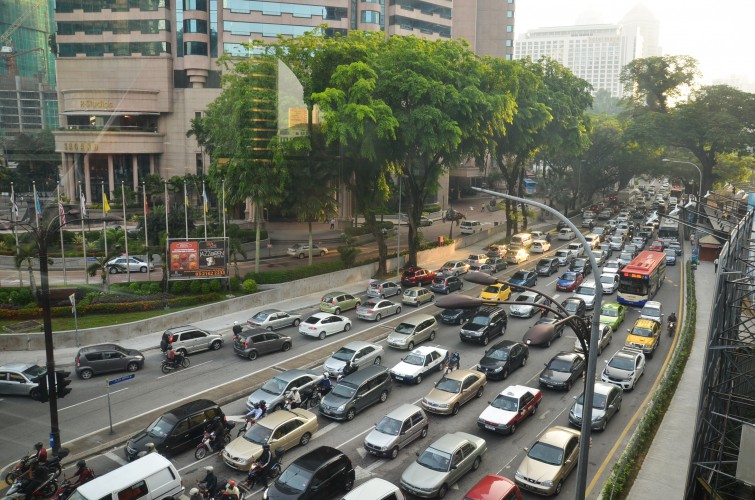 35% of Malaysia’s consumption of fossil fuel goes to powering its cars. All of us are indirectly murdering a third world family by continuing our unsustainable dependency on our automobiles. By contributing to global warming, we are arguably worsening the already deadly impact of typhoons and increasing the rate of desertification of arable land, denying farmers the ability to support their families. Just because the immediate impact of global warming does not affect the comfortable middle class amongst us, it does not mean we can absolve ourselves from all the responsibilities of protecting our more vulnerable brothers and sisters and the sins of having been part of such atrocious crimes against humanity.

Why do we believe so gullibly that ownership of a car would guarantee us freedom?

When I first returned from Singapore to Kuala Lumpur, I remained in my house for a long time. It was partially due to the phobia of stepping out of the house and exposing myself to the discomforts of travelling around. During that period, the newspapers reported multiple murders in broad daylight and my parents kept cautioning me about being alone in the city. Crossing the road was a hazard because death could be just around the corner, the KTM was a hotbed of crimes like pickpocketing and robbery, Malaysian taxis are famous for over-charging its passengers and the public bus only stops once every hour outside my housing area. But the boredom of being at home finally forced me out of the compounds of my house. I adjusted slowly to the rhythms of life in Malaysia and found ways to adapt to the deplorable state of public transport in Malaysia. Walking became my main mode of getting around between places not served by public transport. While my cortisol levels must have gone up by leaps and bounds battling car drivers who mistreat walkers, I have also found sanctuaries within the city not accessible by car. Walking became much more than a means of travelling around the city, it became an experience itself.

Walking allows me to be immediately connected to my surroundings.

Through all the solitary walks, I became infinitely more aware of my own existence in a metropolis teeming with people like Kuala Lumpur. Strangers who walk are friendly to each other. A smile, a nod or a greeting to people we see everyday while going about our same routine, is what binds a community together. In our cars, the customary form of greeting is a ‘honk’, and one can never distinguish if it was meant to nudge other drivers or if it was a friendly ‘hi’ replaced by the piercing mechanical scream of a ‘honk’. The kinds of interactions that exist on the roads are devoid of emotions and language. It takes places between unfeeling, inorganic machines. Drivers on the road will never feel a sense of community as pedestrians on the streets do. On the road, each driver is an isolated being sheltered from the noise and heat outside in the air-conditioned interiors of their cars.

But eventually, taking public transport and walking under the scorching hot sun became intolerable. The initial novelty of travelling around a city I was not familiar with has slowly worn off. Commuting to work took more than an hour and the dread of waking up every morning got worse. I became increasingly disillusioned with taking public transport and slowly substituted my commute with private taxis. I can’t wait to get out of this city.

An all-encompassing solution to our traffic problems cannot of course rely solely on the improvement of our transport systems. On top of measures to improve our rail transit and public buses, the landscape architecture and urban design of KL should also be prioritized. The psychology of walking on the streets, the perceived danger of venturing out, and tackling the heat and noise pollution on the streets are just some of the areas we can begin to focus on. The government, no matter state or federal, cannot continue the trend of building more highways to solve congestions. It is time for the citizens to be more vocal about KIDEX.

Lay Sheng is an architect to be from KL. He understands the benefits of scale in cities and would like to see most cars removed from KL roads. He is an urban explorer who traipses around KL on the weekends to reconnect with his Malaysian roots as a newly minted critical thinking adult. He currently interns at #BetterCities.