Deprecated: Function create_function() is deprecated in /home2/bettercities/public_html/wp-content/plugins/cpaddons-site-software.php on line 32
 Lessons from #TheLivingCity |

Our design intern, Lay Sheng muses on the various processes of city-making from his experience at The Living City’s debut at Festival Belia Putrajaya 2014: 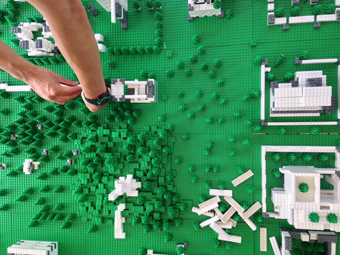 #TheLivingCity is an open invitation to every concerned Malaysian citizen to participate in a discussion of an ‘ideal’ city. Malaysians often feel excluded from the process of the making of the cities they inhabit. This disconnect at times is reflected by underutilized public spaces, elevated roads that sections across well-established communities and degenerating livability of our cities. In our experiment at #TheLivingCity, we transfer the power of politicians and big developers completely to the people.

Everyone is invited to contribute a building/facility onto the green terrain using Lego as the only construction material. Originally, a virgin forest blankets the entire green terrain. Deforestation occurs to accommodate the newly built buildings until an entire Lego metropolis is formed. Over the three days of the festival, we were able to observe an intense non-verbal negotiation process between our participants on what an ideal city should look like. The conclusion of the project saw a city that has undergone many rounds of evolution to arrive at a temporary equilibrium to satisfy the sometimes opposing needs of different groups of people. While FBP2014 has ended, the evolution of #TheLivingCity is in no way complete.

“A great city is not a static place in time. It evolves and changes to become different memories to different people.”

Via this three days experiment, a lot can be learnt about the way our cities work when power is restored to its people to decide the fate of the places they live in.

#1: Urban mobility is a primary concern of the people 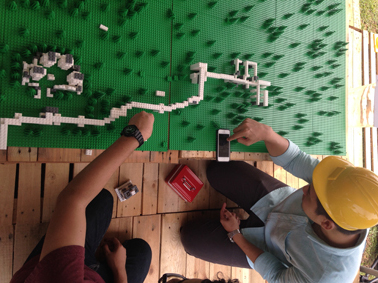 When the game first started, our earlier participants set out to build an elevated rail network. Soon after, an interesting pattern emerged in which most people added their buildings in the vicinity of the train tracks. The rail network was further extended to cover the entire geography of the still nascent city. It was interesting to note that no roads were constructed throughout the entire gameplay. Skywalks were also introduced soon after as people sought to connect different skyscrapers to provide mobility within the city for travellers on foot. While the government channels a lot of public funds for the constructions of roads, it seems like the people much prefer they spruce up existing public transport facilities and provide alternative forms of transport with low carbon footprint.

#2: #TheLivingCity is a green city 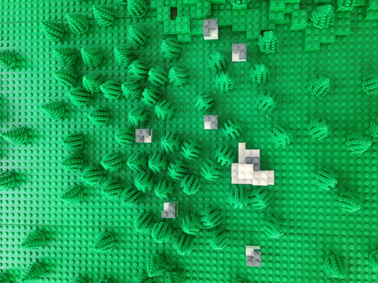 The usage of Lego for construction is a great lesson on the recyclability of many construction materials. Old buildings that have outlived its purpose can be torn down and the materials reused in new constructions. With Lego, our participants can easily reuse existing materials to pursue new forms. A lot of trees that were deforested were replanted on rooftop gardens, hence reconnecting people with nature and rebutting the notion that urban and the natural environment cannot coexist together. If big developers and centralized government have less involvement in the growth of our cities, it seems that Malaysian cities look very different from its present state.

#3: #TheLivingCity is a collective city 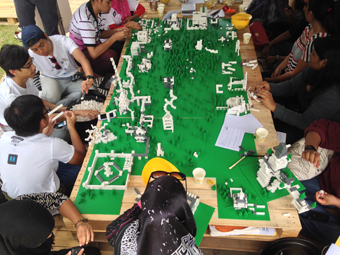 Participants of our game ultimately realize that each individual is part of a larger group of people to whom the city belongs to. The construction of a city of this scale cannot be achieved alone. And while we hope that our creation is spared from the endless cycle of demolition and construction in a city, we are ultimately powerless to stop others from replacing our buildings. This selfless compromise ensures that a city belongs to everyone instead of being subjected to tyrannies of powerful individuals concerned only with the immortality of their creation.

At the end of the three days, all team members participate in the bulldozing of the city as we pack up, which was similar to the scale of destruction inflicted upon great cities by Mother Nature.

The mass destruction is symbolic of the futile attempts of man to resist nature’s ways and it parallels the havoc wreaked on NYC by hurricane Sandy and on coastal cities of Philippines by Typhoon Haiyan.

#TheLivingCity does not die in the hands of a government resistant to the idea of change, it dies because natural disasters are unstoppable forces with our current state of technology.

Lay Sheng is an architect to be from KL. He understands the benefits of scale in cities and would like to see most cars removed from KL roads. He is an urban explorer who traipses around KL on the weekends to reconnect with his Malaysian roots as a newly minted critical thinking adult. He currently interns at #BetterCities.