Deprecated: Function create_function() is deprecated in /home2/bettercities/public_html/wp-content/plugins/cpaddons-site-software.php on line 32
 From Strangers to Neighbours |

From Strangers to Neighbours 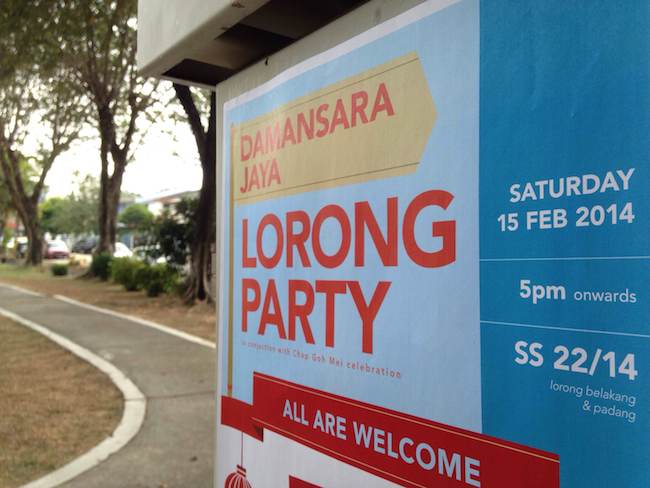 What makes a neighbourhood more than just a group of people who share a postcode? Over the years, a lot of our neighbourhoods seem to have lost a sense of community, with interpersonal interactions becoming rare. With more people driving from point A to point B, there are fewer chances of daily serendipitous meetings with those around you.

Of course there are many reasons why neighbours don’t really know each other. That’s why Teh Chi-Chang, the Councillor for Zone 5 PJ (which covers SS21 and SS22) decided to organise a neighbourhood party for the residents of Damansara Jaya. His intention was simple, to “give residents an opportunity and reason to come out and mingle with each other and build a community spirit.”

Instead of having the party in the street, the party was held in a park that was conveniently located in the centre of the residential area facing Jalan SS22/16 and 22/14. Working alongside #BetterCities (who organised the party’s logistics and activities), the party was held just after Chinese New Year on Saturday 15 February. We hoped it would encourage a wider spectrum of residents to participate and connect with one another.

Inspired by the work of public space artist ‘Eltono’, Lia Tostes from #BetterCities constructed a large interactive mural installation called the “Automatic Mural”. One of the ways we got residents to break the ice was by asking them to add to the mural by randomly selecting the shape, colour and position of a predetermined template. The end result was a display of each of the participants own interpretation of the template.

There were a few gardening activities on the day as well by Alex Lee (#BetterIpoh Lead) and Shao Lynn (Eats, Shoots and Roots).  Alex carried out a seed bomb making workshop and Shao Lynn, a Damansara Jaya resident herself, came ready with coriander and spinach seeds to share the basics of urban gardening to everyone, including children (who enjoyed getting their hands dirty). Hui Ping Foo, who championed the Back Lane Project last year and was winner of a Genovasi grant to develop this idea, has had a fair share in organising community parties. She brought in a team of delightful volunteers from the Architecture department of the University of Tunku Abdul Rahman and friends who are also passionate about neighbourhood projects.

We also wanted to find out how residents felt about the place they lived in and what they felt was lacking, so based on an idea from Neighborland.com, we used some chalk and stencils to conduct a neighbourhood survey by getting residents to fill in what they felt they wanted to see in Damansara Jaya.

“I want a (blank) in D.J.” was chalk-sprayed on the pavements of the park and we received a mix of responses at the end of the day. Some of the responses included: I want a “Disneyland” in DJ, I want “unity”, I want “better security”. As there were quite a number of older citizens, a few of the responses were for a pondok or small hut for people to sit and rest in between their walks, and there was also a request for a football field. Festivities took place just after 5pm when the scorching weather started to cool down and we realised that food really is the best social conductor. The potluck table was filled by the time the party started. There was fresh cold watermelon juice, cakes, fruits, spaghetti and even some roasted chicken. To our surprise an uncle brought along a big bag of fresh coconuts and a parang to serve us all fresh coconut juice!

At one point it started to drizzle, but instead of fleeing a group of aunties immediately huddled over the food with their umbrellas. It was definitely quite a scene to see people mingling and eating in the rain. The majority of people at the party lived either facing the park directly or a few lanes away. The neighbourhood community policemen joined in too, one off-duty officer even brought his wife and four year old son. A few people had found out about the party online and came from neighbouring residences in Petaling Jaya. Sharon Chong who lives in Taman Mayang Jaya, close to the Kelana Jaya LRT, came with a bowl of spaghetti and said that it was quite rare to hear about such an event, “I was really interested to see what it was about and what kind of people were involved in such an initiative.” Besides being a way for neighbours to get to know one another, it was a good way to meet new people as well.

“Occasions like these are a good excuse to get people out of their houses on a weekend to sit and talk to the people that live closest to them.”

Residents said that most of them recognised each other’s faces but until that point had no idea what most of their names were. It was nice to see people introducing themselves to one another making small talk and having chats about community safety issues in a relaxed environment.

An elderly lady known as ‘C’ shared that she often sees her neighbour coming home from work too tired to make conversation, the most she gets is a brief hello. “It’s understandable amongst the youngsters, you can imagine how tired they are after a long day, that’s why occasions like these are a good excuse to get people out of their houses on a weekend to sit and talk to the people that live closest to them.”

We definitely had a great time organising the party and meeting so many different kinds of people. We would highly recommend anyone to do this in their own neighbourhood. The first step would definitely be to get in touch with your local Councillor. If they can come on board it will be a big help.

But what you also need is a group of people, the more the merrier, to help organise the party and decide on a date. Be sure to send out invitations (we invited people with flyers) and notify the security officials if need be. For more ideas and party tips check out www.streetparty.org.uk and www.thebiglunch.com. Don’t forget to send us an invite!

Yasmin Lane is currently the researcher at #BetterCities and is enjoying the process of deconstructing how she views the city to incorporate a human touch.