Deprecated: Function get_magic_quotes_gpc() is deprecated in /home2/bettercities/public_html/wp-includes/load.php on line 643
 admin |

Welcome to WordPress. This is your first post. Edit or delete it, then start writing!

ReCAR is a model for a new public utility company that owns and operates carports throughout the city, equipped with compact and environmentally- friendly cars. This concept was nominated for the Living Labs Global Award 2012 in Rio de Janeiro and exhibited at the British Council’s Everything Forever Now, an exhibition on sustainable designs in Malaysia.

ReCar is an innovative break from the typical transportation model. The traditional model is a patchwork of best attempts at managing the various interests of city planners, individuals, and the transport authorities, often resulting in highly inefficient solutions. ReCar re-imagines the very idea of private mobility and proposes a solution that encourages the efficient use of public transportation while increasing urban mobility.

A typical office worker drives into the city in the morning and leaves the city for home around sundown. Even in the most traditional work cycle that’s an 8 hour stretch of her car sitting idle waiting for the return trip. Chances are it’s a single occupancy vehicle.

Multiply that by every office worker in the city and you have the single largest collection of idle metal concentrated in massive concrete structures called parking spaces. This creates massive dead spaces within cities. 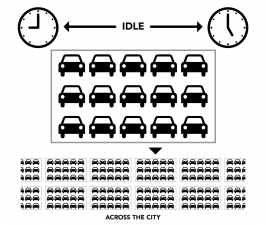 The ReCar is an alternative model that allows people to move freely within a city, save time on traffic and save money on parking. Commuters would use public transport like buses and trains to get to the city.

They would then able to hire a ReCar at various points throughout the city for intra city commute, leaving their ReCars at the carport closest to their destination. These cars would run on natural gas.

ReCar is a model that could lead benefits in the economy, environment and in the community. More importantly, it would encourage more interactivity in the city, and could allow public spaces to be reclaimed from vast, idle car parks.

ReCAR is currently exhibited at Aedes Berlin’s Smart City: The Next Generation, Focus South-East Asia in Berlin, Germany from May 18 – July 4, 2013

ReCAR was showcased at the British Council Malaysia’s EVERYTHING FOREVER NOW exhibition from August 25 – September 13, 2012.

Much of an average commuter’s daily commute in Kuala Lumpur is spent idly waiting. In response to this scenario, While We Wait is a creative, interactive project devised to address and interact with commuters’ idle time while they wait for their bus to arrive. 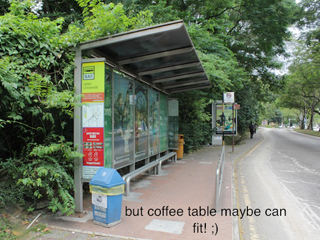 The project consists of a series of activities, installations and surveys to initiate curiosity and conversations about shared spaces and quality of time/life in a city.

Bus stops are typically temporary, transitory congregation points with its monotonous design reduced to serve this said utility. The process of “hacking” a bus stop space looks at the potentiality of shared public spaces, i.e. “What is missing?” and “What could be there?”.

The purpose of While We Wait is three-fold:

It is also an attempt to understand, engage and instigate the commuters and their social encounters within this shared space.

While We Wait has been presented at several conferences: 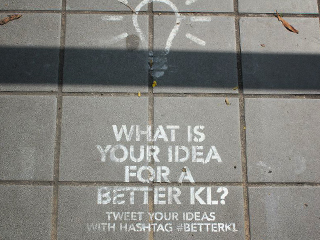 While We Wait is supported by The Embassy of Finland Malaysia.